This is one of the times when I hate being a single woman! The car dealers are like vultures and no matter how much I've studied up on what to ask and look for, I still end up "acting like a woman buying a car", namely, falling in love with how "cute" it is, or how clean it looks or, with my most recent purchase, being tired of looking and talking and dealing and test driving CARS!


My son's car had a total breakdown, he just started a new job so I sold him my "gramma car", as my grandkids call it, a '97 Buick LeSabre. Then, for 4 days I borrowed a neighbor's car to do errands, plus she drove me around to find another used car. The first one I fell in love with (also the first one I drove) was another Buick LeSabre, lol....except it was 5 years newer than my other car. Too close to closing time on a Saturday on a holiday weekend to make a decision, plus it was 25 miles from home and they wouldn't let me take it to have my mechanic look it over. They probably would have had a sale if circumstances had been different.


The second car I drove (and fell in love with) was a 2002 Pontiac Bonneville....loaded! Still within my price range, but my mechanic felt like there were some things that just didn't look right. The main thing, and why I didn't buy that one, was because there was some rust under the hood that had been painted over. I even took it to a body shop to get their opinion and the owner said it would cost about $125 to fix it, but that eventually the rust would eat through the hood. I couldn't see buying a car knowing it has a problem that can't be fixed 100%. That was even more gutwrenching than not getting the 2002 LeSabre.


Third day of looking and I was actually going over to make a deal on the LeSabre, but decided to drive a few more cars so I could say I test drove a variety and didn't make any impetuous decisions. After looking at, driving and falling in love with two basically luxurious cars, why I decided to drive this 2002 Chevy Tracker, I'll never know! And I ended up buying it based on price, gas mileage, 4 wheel drive and ...... it's cute. LOL!


I think I was just tired of looking and depending on my neighbor, but I DO have buyer's remorse because AFTER I got the car, I looked up reviews on Consumer Reports and all the other auto review-type sites and I feel like I made a mistake. It doesn't have a great safety record and they're not even made anymore.


I figure the best I can do is to pay it off as fast as possible and then start over, but maybe I'll enjoy the 4 wheel drive once the snow starts here in Michigan.  So here's the Tracker (I named her Skippy) and her owner! Aren't we cute? LOL 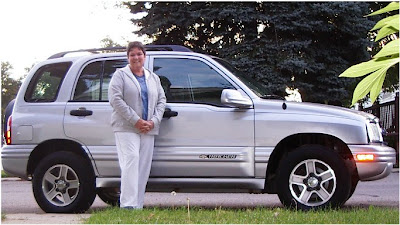 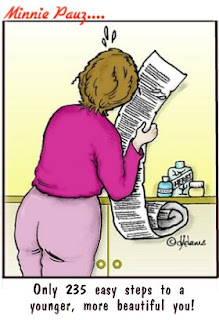 When did reports of something that "could" solve your problems or "might" be helpful or "may" cure whatever, become a reason for many of us to hand over our hard earned money to buy products that have a list of side effects and risks a mile long? It just hit me how prevalent it is to put out basically a press release and the media uses this very shallow information as a news story!


What prompted this post today? I watch the "news" about menopause each day so I can share the info with my readers on my website, blog and on Facebook. Today I saw a headline that says, "Soy may ease sleep problems in older women". As I read through the article I kept seeing phrases like "small study", "disappointing results", well....here, read for yourself:


Reuters Health - The estrogen-like compounds found in soy could help postmenopausal women get a better night's sleep, according to a small study.
These compounds, isoflavones, have been tested for a number of menopausal symptoms as well as for treating health problems that become more common after menopause, such as high cholesterol, high blood sugar, and increased body fat. But so far, results have been disappointing.
Insomnia is very common in older women, Dr. Helena Hachul of the Universidade Federal de Sao Paolo and her colleagues write in the journal Menopause. Studies of whether hormone therapy helps with sleep problems have had mixed results, they add.
To investigate whether isoflavones might be beneficial, Hachul and her team randomly assigned 38 postmenopausal women with insomnia to take either 80 milligrams of the isoflavones or a placebo for four months. All of the study participants underwent polysomnography, which involves spending the night in a sleep lab so vital signs, sleep stages, and movements can be monitored; this is considered the gold standard for measuring sleep quality.
In the isoflavone group, average sleep efficiency (meaning the percentage of time that the women spent in bed that they were actually sleeping) went from 78 percent at the beginning of the study to 84 percent at the end; for the placebo group, sleep efficiency increased from 78 percent to 81 percent. 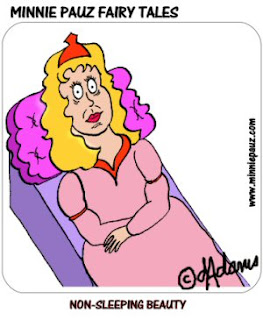 Among women given isoflavones, 90 percent reported "moderate or intense" insomnia at the beginning of the study, while 37 percent did after four months; in the placebo group, the percentages were 95 percent and 63 percent, respectively.
Between one-third and two-thirds of postmenopausal women have insomnia, Hachul and her colleagues note, but the causes underlying those sleep complaints may be varied. During the overnight observations at the beginning of the study, for instance, about a quarter of the women were found to be snorers, several had five or more sleep apnea events per hour, and a few displayed leg movements more than five times per hour.
Without knowing the source of postmenopausal insomnia, the researchers cannot say why soy seemed to alleviate it for many of the women taking the isoflavones.
In addition, because the study is small, the authors caution, it "does not permit the assumption that soy will act with the same efficacy for every woman." Nevertheless, they conclude, given that insomnia troubles so many women during menopause, "phytoestrogen treatment should be considered an option to improve patients' quality of life."
SOURCE: link.reuters.com/kum98n Menopause, published online August 19, 2010.
I realize that soy has been helpful in many areas, but first it was the cure all for hot flashes and now it's being touted for insomnia? Come on....the only thing way to get reliable information is by talking to other women and finding out what worked for them! Even then it doesn't mean it will work for you, but I feel opinions about a product from 4 or 5 women are more reliable than any of the commercials on tv or the press releases that pass for "news"! What do you think? Does this kind of report make you run out and buy anything that says it MAY help?
blished online August 19, 2010
Posted by Dee at 8:36 AM 6 comments: