I was looking over my old blog (that really never got off the ground) and decided to transfer some of it over here where I'm making more progress towards a daily commentary! I thought this report was right on since so many of us are dealing with insomnia throughout our menopause experience.

Insomnia keeping you awake?
While new moms and pregnant women are suffering, they are not suffering the most. Yes, more pregnant and post partum women experience insomnia a few nights each week than other age groups but when it comes to sleep disorders, such as snoring, restless leg syndrome and sleep apnea, a condition characterized by difficulty breathing, post-menopausal women are having the hardest time. 50% of post-menopausal women, more than any other women’s age group, said they experienced a sleep disorder, according to the poll. Six out of ten women in this group said they battled insomnia. http://www.cbsnews.com/blogs/2007/03/06/couricandco/entry2540168.shtml
What kind of things do you take to help you? I've had some women write me and say they have to use sleeping pills like Ambien or Lunesta (both of these are linked to a free trial offer) and others use things like SleepyTime tea (definitely my favorite). It's more important than we initially realize to get a good night's sleep because it affects every part of our life if we don't. 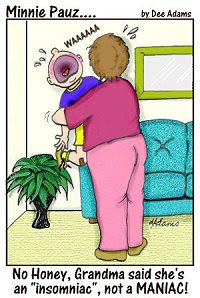 Please take care of yourself and do what you have to do to get as much restful sleep as you can manage, ok?
Let me know what kind of problems you're having with sleep. I found something new that I'll be bringing to you in the near future called Dreamerz. I'll let you know in a few weeks if it's something that might help a lot of us!
Posted by Dee at 1:42 PM No comments:

Menopause, you can let it get you down or you can find something in it to laugh about.

That’s what Dee Adams, creator of the one of the top web sites on menopause has done with the release of her first book, “Laughing Your Way Through Menopause.”

The book offers many of the most popular cartoons featuring the character Adams created 10 years ago, Minnie Pauz, who’s adventures with hot and cold flashes, hormonal changes and general craziness caused by menopause, have appeared on http://www.minniepauz.com/, a web site that offers humor, information and the chance for menopausal women to interact.

In addition to the cartoons, the book is liberally sprinkled with humorous stories, and anecdotes contributed by Minnie Pauz fans. “I call these stories Minnie Moments.,” Adams said. “They’re sort of like senior moments, but we don’t like to use the S word.”

Adams created the minniepauz website because “I wanted to help women get a giggle out of what we are going through in midlife. When I first showed women the cartoons, everybody said they had not seen anything like them out there. My website was the first site where women could come together and talk about menopause.” Adams and her website have been featured in Time magazine, CNN, the Los Angeles Times, the New York Times, Forbes magazine, More magazine and numerous other media outlets, including a PBS special on women's health.

“People have been after me to do a book for 10 years,” Adams said. “I think I have a lot of readers who will like having something to hold in their hands instead of having to go to the computer to enjoy the cartoons. Women tell me that on those days when they feel blah, they need a dose of Minnie Pauz cartoons. This book gives it to them.”

“Laughing Your Way Through Menopause.” is currently available on http://www.lulu.com/content/965290 and will be later sold in bookstores and through Amazon.com.
Posted by Dee at 8:50 AM No comments: