Bio-Identical Hormones. Are they really? 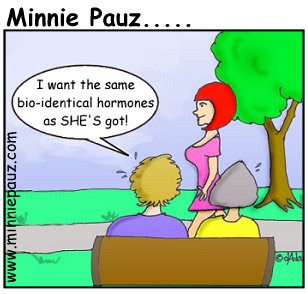 Bio-identical hormones.
Are they really?

We have Oprah, Suzanne Somers, Christiane Northrup and even Dr. Phil's wife, Robin McGraw on the bio-identical bandwagon, but we're still as confused as ever and I personally feel there is still pressure to sell us (middle-aged women) some very expensive drugs that are being hyped as the fountain of youth!

At least one of them is a doctor (Northrup), but
honestly, you can always find equal numbers of doctors, scientists and researchers who either agree or disagree with the safety and the efficacy. I wanted to laugh when the opposing doctor in the audience stated that the drugs you get from the compounding pharmacy (she doesn't accept the bioidentical term) are not monitored by the government, so you don't know what you're getting and if it's safe, etc. The laughable part was because of the 20+ years that the FDA was in bed with the pharmaceutical industry and pushed Premarin and Provera on women like it was candy, saying it would "make you feel like a young woman again"! How is that any different than people saying bioidentical hormones can help a woman get her quality of life back?

If the FDA did nothing to protect us until they were forced to by the WHI report, why should we have confidence in them now when their chain is still being jerked by the pharmaceutical companies? The compounded hormones have been used for many years, but no one said anything about them until the traditional hrt drugs were forced off the market because they
were proven to cause cancer, etc. THEN the pharm companies started demanding that the compounding pharmacies not be allowed to do what they've been doing all along--creating prescribed, individualized doses of hormones for women.

I actually tend to trust what Suzanne Somers says because I can see that she has done the research and does use everything herself. She clearly states that her regimen is not for everyone, but she is proof that she's doing something right if she feels as good as she says
she does. She certainly looks good at 62. And so does Dr. Northrup, but I'm pretty sure both have had some kind of cosmetic enhancements. It's not just hormones that make them look good.