Hey!! Did you notice I just posted YESTERDAY? See, I'm getting better already and there's still one more day before 2008!

So, I was looking back over my recent posts and now that I'm building momentum, I think I'm ready to tell the world about my blog. I really want some comments on what I'm writing each day!! It's hard to tell if anyone is out there, stopping by, reading my blog? Part of the challenge is to hit on a topic that resonates with one or two people and then have them tell someone else and on and on until it's VIRAL!!!

I realize I have to get focused first though. For the last several years I haven't been able to narrow it down. I've gone from menopause to Minnie Pauz and cartooning, to middle age to being a grandmother, to ...... well, it's just all over the place and until my main voice comes through or I say something really controversal, I'm just going to be another blah blogger.

That's it for today folks. Need to go cook dinner for my son and his oldest son, Tye, who is 12 1/2 and knows EVERYTHING! The one I gave a cell phone to for Christmas and he's since decided it's not what he wants regarding the type of phone or the program. Maybe I'll just put arsenic in his mashed potatoes...the little ungrateful.... Oh well, he's just a product of his environment, isn't he? Kids today feel so entitled.
Posted by Dee at 4:43 PM No comments: 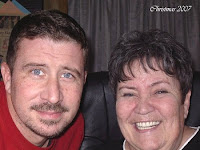 I'll just head into 2008 with the hope that we'll all become stronger and more loving and more forgiving. and things WILL be better!
Posted by Dee at 7:47 AM No comments:

Well, that's another year I made it through! Sometimes you look back and wonder how you did it. There were some family crisis's (not sure how to spell that) and a full year of worrying about my business (http://www.minniepauz.com/), my weight and my dental issues, along with the war, the economy, the planet and it's most innocent inhabitants.
Anyway, I hope 2008 is better for all of us! New year, new promises to blog every day....even if it's just to log the day with a photo. Actually what I should do is take one every day....hmmmmm. I still haven't figured out how to get the photos where I want them here! What's today, the 28th? I've got a few days to practice! :) Ok, here's one that shows how I watched my youngest grandkids (in Dallas) open their presents on the webcam!! It was SO
wonderful...much better than trying to talk to them on the phone! 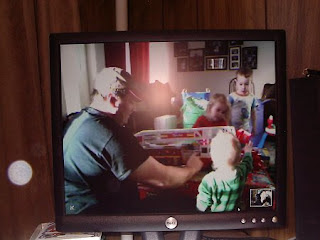 Then here's a picture of what I sent them! I leave the toys and clothes to everyone else and I usually get them something that will be used for several years (picnic table, wagon, etc). These are Bongo Bags and I didn't realize the kids actually enjoy them. My daughter-in-law told me they love to get inside and roll around, but mostly it makes them want to pick their toys up (and keep them in the Bongo Bag). The first thing one of the boys did was crawl inside! My son got a picture of it but hasn't sent it to me yet. Anyway the fingers are pointing to the Frog, the Elephant and the Alligator...... 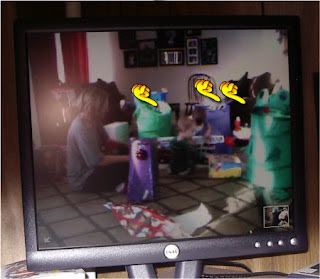 I've decided I'd much rather be called a baby boomer than to be called a "middle aged woman". I guess it's because the "MAW" tag seems to put one at the tail end of the age line....more towards the dreaded "Senior" group....and the BB tag could put one anywhere between 43 and 61.

The MAW brings to mind things like menopause, midlife crisis and incontinence, where the BB title more often makes you think of free love, former pot smoker and leaders. Well, who would choose the former?

I realize it's just semantics, but there seems to be a definite difference in the FEELING (and status) of each title. How would you describe yourself? Here's how "Minnie" does it...... 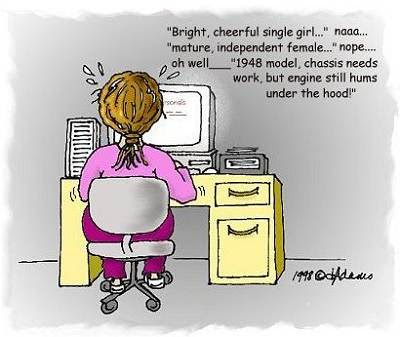 I'm on a rampage after all the problems with the toys made in China and since then, finding out how many of the products we use every day are made there. It's shameful!!! So I've been trying to get everyone I know to BUY USA!! I've always thought of Wal-Mart as one of the most American stores there could be, but the truth is 70% of their products are made in China. I also just joined this organization: www.wakeupwalmart.com and would encourage my readers to take a look and then take a stand.

Why you should buy from small toy shops, not Wal-Mart
The Boston Globe reports that shoppers are buying toys for their children at small stores and avoiding Wal-Mart Stores Inc. (NYSE: WMT) whose Chinese toys they fear.
One Cambridge, MA store, Stellabella Toys, has shifted its merchandise suppliers from Chinese to European and U.S. toy makers. Stellabella bought as many LEGO toys (made in Denmark) and Playmobil products (made in Germany) as possible. And it added new lines, including German stacking toys and wooden trains from Maple Landmark Woodcraft of Vermont.
More than 65% of consumers will refuse to buy toys from China this season. This hurts Wal-Mart which offers cheaper prices by importing Chinese merchandise. That's because 80% of all US toys are manufactured in China, where they are cheaper to produce. It is more likely that the Chinese toys will end up in mass merchants like Wal-Mart, which often carry large volumes of toys.

I don't know if Wal-Mart will start buying safe toys -- its purchasing volume could drive down the prices and thus bring back some of those shoppers. But in the meantime, you can check out the toys sold by small stores like Stellabella. At least it's supplying what American shoppers want -- safe toys for their families.
Posted by Dee at 5:50 PM 2 comments: