I will admit that I've been watching what I eat, but that's mainly because I want to do things right while I'm taking these supplements. The biggest effect, I think, is from taking the fish oil. It really helps clean out your colon on a daily basis and THAT'S GOOD!!!

Today is the last month of June and I have no idea where the rest of the month went! I haven't been very productive, that's for sure.

I've been trying to work on redesigning the website, but it seems too big of a job and no matter how I move things around, it always looks the same to me. I'm stuck!! I need some help!! Just can't afford to pay a designer right now! 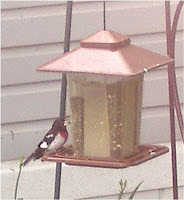 I have managed to get more bird pictures. I just love the rose-breasted grosbeak. I've had two males and a female on this feeder at one time. They are very peaceful birds and have the most beautiful song. Think I've mentioned them before on my blog.


Today I'm going to try to get on a health program at St. Joe's. A friend told me about it and I really need to check it out so I can get a complete checkup before I try to get on the Humira for the psoriasis. I want to make sure I'm healthy enough to have my immune system compromised by the Humira. The psoriasis is getting worse by the day and it's embarrassing to go out in public. I still can't get over that this has hit me so late in life and with such a vengeance.
Posted by Dee at 9:45 AM No comments:

Don't know why I feel that I'm getting nothing accomplished lately, but man the weeks go by fast! I do need to mark this week on the calendar as when I started these new detox supplements sent to me by a doctor friend. She's convinced that she can help me improve my psoriasis. I'm afraid I'm kind of cynical about it and have the papers ready to apply for Humira's financial assistance program (because the shots are $1200 each 2x mo. and I have no insurance).

One thing I'm sure of though, Im bound to lose weight. Yippee!! I even bought healthy food today! Organic lettuce and milk, lots of fruit and fresh veggies too. I'm kind of rev'd up now!!
Let me know if you're interested in the combination of stuff I'm taking, ok?
She asked me to give it (the program) two weeks, but I'm not sure if I can hold out that long since the psoriasis seems to be spreading faster than usual. That may be the heat. It's on both arms and the backs of my hands now, plus I see a few spots coming out on my palms. I certainly never expected this to affect me in my 50's! Never even knew anyone in my family that had it, but it must have been there somewhere.

I wanted to show you how the red rosebush turned out. I should have taken the picture a few days ago, but I forgot. 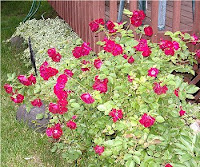 But when they don't bloom, it might as well be a weed! I've had these two rose bushes for about 8 years and only one of them blooms. The one that doesn't bloom was given to me by a neighbor who moved and should look like this

but all I get are these tall healthy stalks with no flowers. 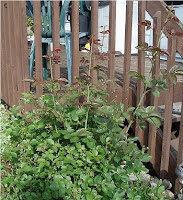 The bush that does bloom is red and it is pretty, but not the kind of roses I enjoy....here it is after blooming This might be called "Purple Simplicity", not sure. This bush is the same one in the picture above. 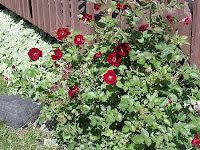 The leaves on the red bush kind of surround the other one. I might think that was the problem, but I have tried pruning both so they get plenty of sun and air through each plant. I've bought a rose book, trimmed them, pruned them, washed the plants with dishsoap to get rid of the bugs, given them rose food, and even put banana peels under the soil next to the plants. Oh well, guess I'd better enjoy what I've got and maybe some day I'll find a yellow rose blooming by my deck! :)
Posted by Dee at 12:17 PM No comments:

I'm not talking about the kind you sit in. :) I'm watching Good Morning America and Cyndi Lauper is performing and it's actually making me feel a little better about my age and all the aches and pains I'm starting to experience.

There was Cyndi in black leather singing one of her rock songs and I realized her actions were really tamed down compared to how she used to bounce and run all over the stage. I've always been a fan of hers so I'm not putting her down, just noting how one of our age group (babyboomers) is showing signs of....well, you know!

First of all she looked a little "thick" around the middle. We can relate to that, right? Maybe it was just that leather jacket, but I'm not sure. Besides, it was HOT and HUMID out there today, so what was she covering up? What really caught my attention though was when she got down on her knees during the song....now, bless her heart for being able to sing while she's doing ANYTHING else, but I really felt for her when she put her hand on her one knee and PUSHED to get herself up!! She struggled getting back up on the stairs later on too and asked for a hand.

I love that she sang "Girls Just Want to Have Fun"!! One of my favorites! I still love her energy and her uniqueness, I just feel a bit closer to her now that I've seen that time is also taking its toll on celebrities too, not just me!
Posted by Dee at 8:43 AM 1 comment: 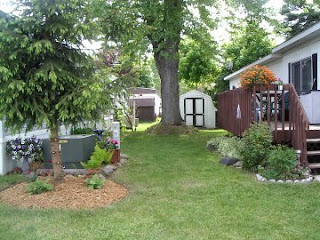 Ever since Mother's Day, my daughter and I have been working on my yard. It's amazing how even a tiny little yard in a mobile home park can look really awful or really pretty with just a little landscaping. My daughter has a knack for it and knows which plants should go where and since she's been laid off since January, I've been trying to give her a way to make a little $$$.

Here's a picture showing how she trimmed the pine tree branches and put mulch and some plants under it. 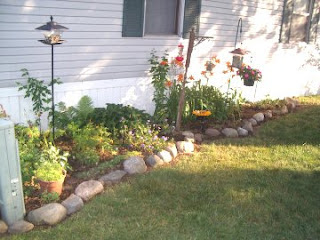 Here's the flower bed that is behind that green electrical box that she designed too. I also have a birdbath over there, a hummingbird feeder and 3 regular birdfeeders, hence the bird watching in the title. :) I can see the birds while I'm sitting on the deck (or from the window next to my computer) and I'm constantly excited about the variety of birds I get. Everything from various woodpeckers to rose breasted grosbeaks to orioles. 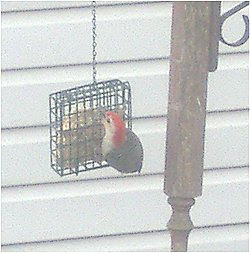 I took this picture of one of the woodpeckers (called a red-bellied woodpecker) through the window so it's not as clear as I'd like but it's the first one I've seen in my yard in 12 years! For some reason, maybe the cold weather we've had, but the hummingbirds are not coming like they used to. :( Anyway, I get a lot of enjoyment out of a pretty yard and trying to attract different birds. I had a problem with blackbirds this year though. Don't know why they took over my yard this year. I finally switched to sunflower seeds only, which seems to have worked, but now the other birds don't come as often. I suspect it might be the neighbors' cats that keep hiding in the hasta leaves though! I really wish anyone who lets their cat roam should be required to put a bell on them!

Now about the "denture" part of my life! I just wanted to mention that I am going to start another blog that is only for people with dentures and with PROBLEMS with their dentures, most likely caused by their DENTISTS. I was going to start it when I realized I hadn't posted here for nearly a month (over a month?), so I will try AGAIN to post here more often. Still trying to "find my voice". Seems strange after 12 years of running my website, but it's hard.
Posted by Dee at 9:43 AM 2 comments: