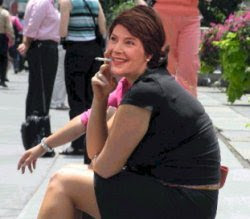 In yesterday's Minnie Pauz newsletter, I mentioned that I was not impressed with how our First Lady is promoting women's heart health when she has not been able to kick the smoking habit herself. I got a couple of emails from subscribers who were shocked that she smokes, but one (from Christine) said:

"I do not know who told you about the First lady being a smoker It IS NOT true."

I sent her this response:

Christine, here is where I got my information.....
She says here that she used to smoke.....
http://archives.cnn.com/2001/ALLPOLITICS/07/30/laura.bush.interview.cnna/

In this report it says she still sneaks a cigarette with her friends:
http://www.nationalreview.com/interrogatory/kessler200604032246.asp
Laura occasionally sneaks a cigarette with friends. In 1994 and 1995, she totally quit a lifelong smoking habit. When asked by the media, she would honestly say that it was "difficult" to quit. But after 1995, Laura went back to bumming cigarettes from friends, though never in front of George or her staff. At the White House, she might step outside on the Truman Balcony to take a few puffs. At the ranch, she might occasionally light up on the porch.
"She is a stress smoker," said her friend Anne Stewart. "She still bums a cigarette."
"If she is sitting around with some friends and they are smoking, she may smoke," longtime Bush friend Dr. Charles Younger, an orthopedic surgeon, said. "She wouldn't tell you she never does it, but it's not an image she would like to promote as a healthy habit from the First Lady who is supposed to be perfect."

And this exerpt from a book by Ronald Kessler: An Intimate Portrait of the First Lady: Laura Bush:
http://www.cbsnews.com/stories/2006/04/05/earlyshow/leisure/books/main1474223.shtml
Even Laura Bush has her vices, such as a smoking habit she can't quite shake. Kessler says the first lady bums a cigarette once in a while: "She goes out on the balcony and smokes a little bit every now and then."

I certainly understand the problem with being addicted to cigarettes, as I mentioned in the newsletter that I'm celebrating 2 years of no smoking, since I smoked at least a pack a day for over 40 years. I was not a national role model and I was able to quit, so I think Laura Bush should completely give it up. THEN she can really put herself out there to tell women how to protect themselves from health problems.

"Mrs. Laura Bush visited Carolinas Medical Center (CMC) on Wednesday, Feb. 15 to raise awareness about heart disease - the number one cause of death of women in America. Mrs. Bush's visit also included meeting patients treated at Carolinas Heart Institute, speaking with doctors and a public presentation in which she outlined simple steps for reducing the risk of heart disease through healthy lifestyles, proper diet, proper exercise and no smoking."

I suppose most of the blame should go to the organizations who are inviting her to speak on women's health. They should choose someone who has beaten the habit and can truly be an inspiration to others (who really do want to quit). Even someone who has survived cancer could give better reasons to stop smoking than someone who just hides their continuing habit. I have no hard feelings for Mrs. Bush, but I don't feel she should be held up as an example in this case.

I try very hard not to preach about smoking since the worst thing in the world (according to smokers) is a reformed smoker. I talk about my success in quitting and about some of the things that helped me quit. It's truly a different world when you're free of this addiction and I encourage everyone (including Laura Bush) to really give it some thought. I have been adding information to this page for two years now. I hope you will find something helpful there!

So let's hear what YOU think!